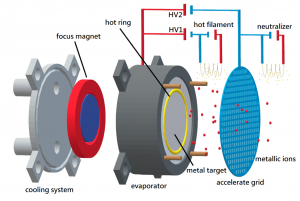 A metal ion thruster using magnetron electron-beam (e-beam) bombardments (MIT-MEB), which can be used in small spacecrafts such as cube satellites (CubeSats) for deep-space missions, is proposed. The new ion thruster concept is never used in any spacecrafts and is very competitive internationally. The thruster provides high specific impulse
(Isp), which is a measure of thrust efficiency, like any conventional ion thrusters. Comparing to conventional ion thrusters where inert gas is used as the propellant, the metal propellant is in solid state, high density, easy to be stored and cheap. The size of the ion thruster can be reduced dramatically and can potentially be used in CubeSats. The
metal is evaporated and ionized by accelerated thermal-emission electrons which is the concept of e-beam evaporation used in e-beam physical vapor deposition (EB-PVD). Ions are accelerated by electric field and provide the thrust through the reaction force on the thruster. For a proposed MIT-MEB with 5 cm in diameter, Pb as the metal propellant, and a 800 W/20 kV DC power supply, the estimated thrust and specific impulse are 11.8 mN and 14000 sec, respectively. The proposed thruster is smaller in diameter compared to other ion thrusters. However, the expected thrust is comparable to any other ion thrusters
but with a much higher specific impulse, i.e., higher final speed. Thrusts can be increased by simply reducing the voltage for accelerating ions. Alternatively, if a 40 W/1 kV power supply is used, the thrust and the specific impulse of MIT-MEB are 2.6 mN and 3100 sec, respectively. It can be scaled down easily to be fitted in a CubeSat. Applying the
mature technique in industry into space science technology is not only very novel but also increasing the successful rates of the development. Thermal-emission electrons can be generated in any vacuum environment so that it is suitable for deep-space missions. The MIT-MEB provides the possibilities to explore deeper space such as Moon or Mars missions using CubeSats with limited budgets.