Neutrons as well as x rays and charged particles can be generated via D-D nuclear reaction when the current sheet is pinched at the tip of the anode (fig. E)[1].
Simulations using magnetohydrodynamics (MHD) model at early time and particle-in-cell (PIC) at later time will be used to study the physics of DPF.
Boron neutron capture therapy uses the advantage of large thermal neutron capture cross-section (3835 Barn for 0.025 eV neutron[2]) of the naturally occurring isotope B10 discovered by Godhaber in 1934[3]. The principle of BNCT was first proposed by Gordon Locher in 1936[4]. Non-radioactive isotope boron B10 absorbing low-energy (< 0.5 eV) thermal neutron subsequently breaks up into an α particle He4 and a lithium isotope Li7[2]:
B10 + n -> He4 + Li7 (6%)
B10 + n -> He4 + Li7 + γ (94%)
Products of the reaction have high linear energy transfer (LET), ≈ 150 keV/μm and ≈ 175 keV/μm for He4 and Li7, respectively. The pathway is less than 10 μm, i.e., shorter than the size of a single cell. Therefore, products are stopped, transfer their energy to the cell and kill the cell. The process of BNCT is shown in the following figure[5]. Boron compounds are first delivered to cancer cells but not in healthy cells. Cancer cells are then killed by the energetic α particles and Li7 generated by the reaction given during neutron beam irradiation while healthy cells remind unaffected by incident neutrons. As a result, targeted treatment is achieved. Boron itself is non-toxic and can be delivered to cancer cells via using borocaptate sodium (BSH)[6,7] or Boronphenylalanine (BPA)[7,8]. Notice that it is how sufficient
amounts of B10 delivered to the targeted cell relative to the healthy cells that gives the selectivity of BNCT. The suggested concentration of B10 in a tumor is 20 ∼ 35 mg/g with a concentration ratio of B10 in a tumor to a healthy cell (brain) greater than 3 ∼ 4[5,9]. How boron is delivered to cancer cells is beyond the scope of this proposal. Developing a suitable neutron source, which is one of the main components of BNCT, is the ultimate goal for this project. 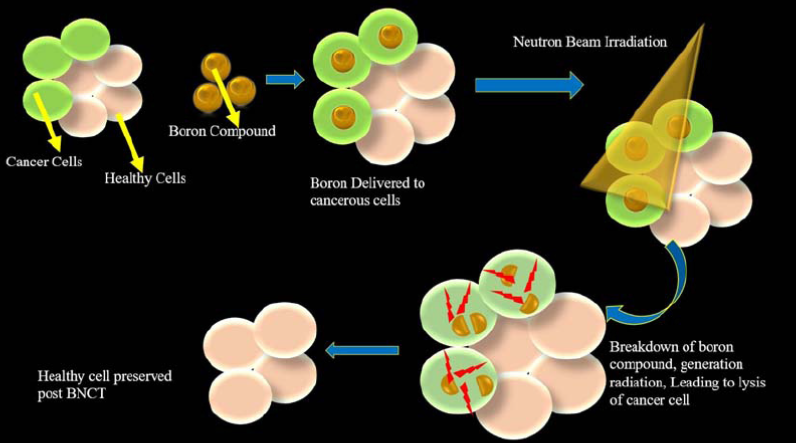